Sue Edwards, Marketing at Downlands Surveying, interviewed Mark Newman about his work as a Land Survey at MNA Surveying.

When did you start as a Surveyor?

I started up as a sole trader in 2003 after 20 years in the Larger Aerial mapping sector. This kind of work involved mapping whole counties, motorways etc. I spent about 4 months building up a client base for my own venture, the contacts were primarily Architects, developers and groundworking companies.

How does the Process work?

The usual pattern for a development would start with an acquisition of land or buildings by a property developer. They in turn would either approach me direct, or through an Architect they have appointed to design and project manage the site.

From the early days, different facets of the project ie Building Surveyors, Groundworkers and suchlike would need various survey work carried out.

What specialist services do you provide?

I have specialist survey equipment which is unique to Land Surveyors and this can provide all manner of data for the industry.

Mapping or surveys, can be carried out in a number of ways. Simple measured surveys of buildings internally can be done with a standard tape or if very complex a Laser scanner, which produces a 3-dimensional scan. You may well have seen these with walkthroughs and rotating views showing everything in 3D.

Our normal work involves mainly handheld lasers and a surveying instrument which is basically a very complex theodolite. This type of instrument is used on larger scale mapping up to a range of 5 kilometers with accuracies of just 3mm.

How do land surveys differ from Building surveys?

In many ways they are the same. However, with the advanced instrumentation building surveys can be carried out very much faster and with far more accuracy.

Building surveys are often part of a larger mapping project that involves a large estate or groups of buildings. The measured building element will have a far more accurate result as this is often used by Architects and engineers so the tolerances need to be smaller. 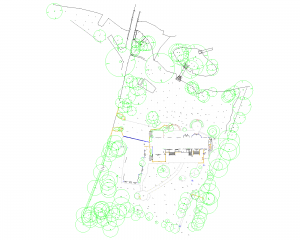 This was a survey carried out for a landscape designer who had been given the task of redesigning a very tired garden. The house had also benefited from an extension refurbishment. In order for the Landscaper to carry out her design, she required accurate level changes across the site as well as correct positioning of all the features currently in place. My survey of this site would serve Landscapers, Architects, Groundworks engineers and of course the client.

This site was interesting in that the clients had already successfully achieved planning consent for 2 additional houses on the site but had decided on only 1 larger house to suit their needs. They have instructed an Architect to design this new house and although they already had planning they needed to re apply for the single unit. As the existing survey was some years old I was asked to update the map and produce new floor plans and elevations as the existing house was to be given a facelift. 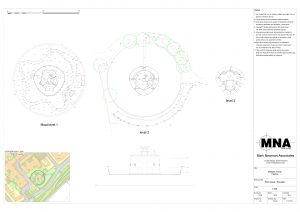 This was a very unusual building. The tower formed part of the English coastal defences from the late 18th Century. As such the tower is listed and cannot be altered both in construction and visually. We surveyed the building at all levels to give the client an idea of what floor spaces could be made available to any new potential projects he may have waiting. The plans for a wedding venue and conference centre have been submitted to the local authority and we wait to see what their thoughts are on this. If it does get the go-ahead then I shall return to carry out a more extensive survey of the grounds and drainage system.

Our thanks to our guest Surveyor Mark Newman for this article. Contact mnalimited@hotmail.co.uk